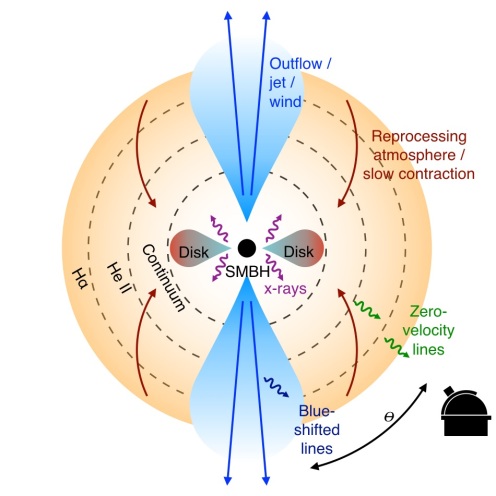 Recently I’ve been really interested in tidal disruption events (TDEs). These are hot, bright flares generated in the centres of galaxies as an unlucky star wanders too close to a supermassive black hole and gets shredded! Along with my collaborators, I just published this paper studying one particular TDE in detail, and trying to understand some strange behaviour: first, all the hydrogen visible shortly after the disruption seems to disappear, whereas helium sticks around for much longer; second, the helium shows a dramatic change in velocity at around the same time the hydrogen vanishes. These behaviours have not been seen before within a single TDE!

The picture above shows our suggested explanation. At the start, from our viewing angle we can only see slow-moving gas falling towards the black hole, but perpendicular to this there is a region where gas is being accelerated outwards. As the slow gas contracts, it gets dense enough to hide all the hydrogen. And the more compact it gets, the more we can see into the ‘polar’ regions where the fast-moving gas is – explaining why the velocity appears to increase over time. The coolest part is that if there is an accretion disk around the black hole, X-rays might escape in the same direction as the fast gas. This means that by looking for TDEs that show both large velocities and X-ray emission, we can actually test whether this picture holds together for the population in general.